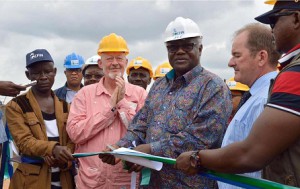 Official opening of the Mill by President Koroma

It’s a clear fact that Green Scenery and other self-seeking International NGOs will bow their heads in shame after the Government of President Koroma officially opened the largest palm oil company in the country and in West Africa last weekend.

It was a carnival throughout Sahn-Malen Chiefdom from last week Friday, Saturday running to Sunday as throngs of dignitaries from Government, Public Sector and local authorities gathered with the President and to pay homage to management of Socfin Agricultural Company for the official opening of the Mill by President Koroma.

The campaign of calumny against Socfin Agricultural Company by Green Scenery, MALOA, and some bigoted International NGO’s like FIAN over the years should be put to rest as the government of President Koroma have committed his government to the reality of the million dollar project.

President Koroma in his address to the gathering at the playing ground on Saturday the 9th of April was clear to all saboteurs that his government will not allowed pseudo Civil Society Organizations to frustrate genuine investors like Socfin Agricultural Company from leaving the shores of Sierra Leone.

The President was bitter throughout his statement to self-styled Civil Society Organizations that are trying to deter the Agenda for Prosperity.

The cooperation of the government was vividly clear to Management of Socfin in which President Koroma appealed to indigenes of Sahn-Malen to give an opened-hand to Socfin Agricultural Company for the benefits of the country and indigenes of Pujehun District and most importantly to people of Sahn-Malen.

President Koroma openly frowned at detractors of Socfin and warned that his government will take stringent action against any Civil Society Organizations that are trying to depressed and frustrates multi-investors in the country.

‘Civil Society Organizations should be careful the way and manner they are propagating negatives issues about Sierra Leone,’ he warned.

‘Message of exploitation, suffering, hardship and unpatriotic posting is totally unaccepted in my government,’ President Koroma was quoting as saying.

The reactions of the people during the President speech speaks volumes that Sierra Leoneans including the government of President Koroma appreciates all the developmental projects Socfin Agricultural Company has embarked on since operating in Sahn-Malen Chiefdom Pujehun District.

However, certain ill-motivated Civil Society Organizations were dumfounded and disappointed to see the first gentle man of the republic to officially opened a company that have gone through several media bashing from senseless and unpatriotic CSO’s.

The campaign of calumny should be stop forthwith as development is what the people of Sahn needed.
Our local Civil Society should starts inculcating patriotism to their country and forgets about ganging with surrogate International NGOs like FIAN who continues to put Sierra Leone in the dark with potential investors.

The campaign of slander and defamation against multi-investment companies is no more needed by Sierra Leoneans as development is what they need in the country, the likes of FIAN a Belgian Non-Governmental Organization that are busy discouraging investors in the country will soon face the wrath of the government.

The euphoria in Sahn over the weekend will continues to hunt self-seeking NGOs and dangerous International Organizations that the government will not encouraged any saboteurs that are trying to derail the stride the Ernest Koroma administration has done in the country.

This writer is optimistic that the likes of Green Scenery, MALOA and other disgruntled organizations will help Socfin Agricultural Company and other multi-investors to build our beautiful country called Sierra Leone.

The pull-him-down syndrome is no more needed at this point in time; forget about driving expensive cars in the streets of Freetown to the detriment of the country, lets us put our country first than so-called International Organizations that are killing our economy

Also, the company provides transport and feeding to students during examination time and also for their social functions such as inter school galas, debates, sport activities and other school related activities in and out of the chiefdom.

The No Good Organization should starts thinking positive for the hapless Sierra Leoneans thank helping criminals to derail the country.

The Chiefdom Authority lavishes praised to Socfin Agricultural Company for the huge hospitality and also helping boosting the country economy and particularly transforming the district and the country as a whole.