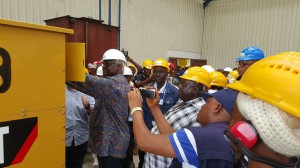 He said SOCFIN was never a government to government arrangement but rather private sector arrangement with due consultations with the locals. He however expressed delight over the apparent joyful mood of the people of Malen chiefdom this time round which, he said, has sent a clear message to the world that “we have not only defeated Ebola, but we are now ready for business.”

The president admonished management of SOCFIN to continue engaging the community to establish a common understanding and at the same time thanked the people of the entire Pujehun district for doing almost everything on their own with the help of the company to successfully defeat Ebola.

Welcoming the president, the General Manager of SOCFIN Philip Tonks referred President Koroma’s tour of their farm site and the commissioning of their production mill as historical. He informed the audience that the SOCFIN palm oil farm is not just the largest in the country, but also in West Africa, and that the company has invested over $ 130 Million United States Dollars, planting 12, 319Ha of hybrid oil palm trees and building a mill currently with a 30t/hr of Fresh Fruit Bunch capacity and with capacity to increased to 60t/hr.

Mr. Tonks pointed out that the plantation area which is situated in the Malen Chiefdom comprised 12, 319Ha of palm oil trees in varying stages of maturity including areas of infrastructure and undeveloped wetland and natural areas. He said the total concession area is 18, 481Ha (45, 647 acres) for which an annual lease payment amounting to Le1, 323, 800, 000 is paid every year and the company has currently utilized 12, 319Ha.

The General Manager disclosed that a total of over 31 Billion Leones was paid to land owners in land compensation for palm oil plantation and also revealed that his company has employed over 2, 460 seasonal workers to support plantation operations plus 1, 091 permanent workers all totaling 3, 551 workers, and most of these workers he said are from the surrounding communities within the company’s operational areas.