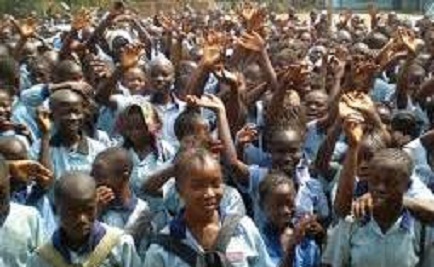 The children were holding placards and posters showing to the Chiefdom authorities and the World and calling on Government to sanction Green Scenery and MALOA for havoc caused in the Chiefdom.

They urged the Government and the local authorities to prevail on critics that are Propagating negative accusations to the International Community making reference to the speech made by  President Ernest Bai Koroma at Malen,Pujehun District Playing Field where he stated amongst other things that local Non-Government Organizations are saying all sorts of all undesirable statements concerning the country.

It was outlined that President Koroma is unequivocal with the truth by warning detractors to stop sending negative messages concerning their country.

Brima Koroma, a teacher of the school highlighted the contributions the Company has made to the school by providing a hostel for teachers, providing stipends for teachers and other facilities for the pupils to have better learning environment.

“Development is what we need in Sahn-Malen. “We say no” to detractors,’ they chanted.
The school pupils with their placards made their statements openly to the Community people and the Government for the unnecessary interference of Green Scenery and MALOA into the Chiefdom.

Posters such as ‘We want Socfin for Development, Green Scenery joins hands with Socfin for development”, “MALOA don’t mislead the people of Malen”, “The People of Malen need Socfin”, “MALOA Go Away”, “Red card to Detractors”, “Red Card to MALOA”, amongst others were boldly printed for recognition to the public and the Chiefdom Authorities.

The challenge the school was facing in the past was a thing of the past with the intervention of the multi-national company.

Ms. Farma, the only female teacher in the school was full of appreciation amidst the growing development in the chiefdom.

The Company according to Madam Farma provides yearly scholarships for pupils taking the BECE examination as a sign of encouraging pupils for excellence in the academia.

The school ,she recounted, can now boast of a standard library, infrastructure, water supply, sanitation and quality teaching materials.

The 27 scholarships provided to the Girl-Child that took the BECE examination with aggregate 18 to 30 will continue until they attain University or College education.

The tireless efforts of the Company towards the development of the school financially as well as morally motivated the school pupils to call on Government and the Chiefdom Authorities to prevail on Green Scenery and MALOA to stop causing chaos in the Chiefdom.

The placards in the above show that the school going pupils are perturbed and disturbed with the senseless disturbances.

The Company also provides assistance to the school authority whenever the pupils are to undertake any public examination.

“They will provide buses, food and financial assistances amongst others,’ she pointed.
The school with the help of Socfin also collaborated with health officials to educate the Girl-Child on the consequences of early marriages and teenage pregnancy.

Haji Lahai, a pupil of Malen Junior Secondary School, was elated because of the massive development Socfin is doing in the Chiefdom.

She asserted that water supply and toilet facilities are big challenges for them but with the intervention of Socfin the school can now boast of water well and good sanitation.