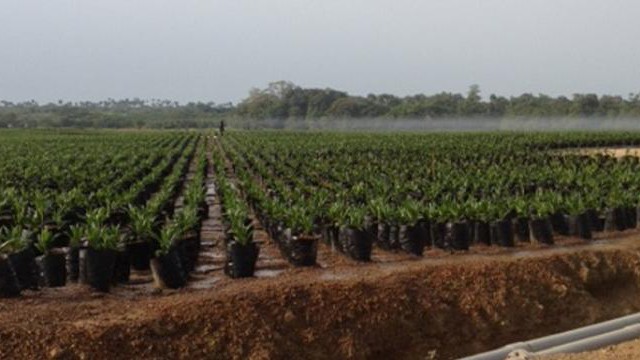 The usually sleepy Malen Chiefdom in the Pujehun District is now looming with people and hustling with life. It has become a beehive of activities, thanks to the US$120 million investment by the SOCFIN Agricultural Company. That investment includes the construction of a mill, nearing completions, that will be the most modern and biggest in West Africa. According to Gerben Haringsma the country representative of the company, when completed the factory will produce 60 tonnes of fruit bunch per hour – amounting to 15 tonnes (15,000 kilograms of oil per hour in peak season). On a 24-hour basis this will produce 360,000kgs per day.

SOCFIN is not shying away from taking the lead its tree-felling and earth-moving machine – BANDIT – is one of only seven in the world and the only in Africa. That is the level of boldness of SOCFIN that great things can be done in Sierra Leone. So far, the company has planted over one million oil palm trees on over 7,000 hectares of land after starting investment in March 2001. Its first trial small harvest is expected in January 22015 with the full harvest happening in 2016 when a total of 4,000 people will be employed mostly locals in Malen Chiefdom.
At present, the agribusiness giant has a labour force of 3,890 workers, mainly locals, with around 800 of them being permanent staff.
“We like to use local people” says, Gerben, emphasizing that recruitment of locals has always been at the core of their policy. “When SOCFIN first visited this Chiefdom for an assessment in 2009, there were hardly any roads or jobs for us here” many people in the Malen chiefdom headquarter town of Sahn said. Less than three years since the company actually started operations, it has spent a total of US$1 million on Corporate Social Responsibility in the areas of roads, bridges, water wells, religious houses, medical care, school, among others. In fact it has built over 1,000 kilometers of roads in the chiefdom which now helps with the movement of goods and services in Malen Chiefdom.

The company has a good relationship with its workers and strives to improve that. It carries out an annual review of workers’ pay. With only about 25% of people in the chiefdom owning land or farm who received crop compensation as set by the government, and for whose land lease was paid, SOCFIN established a Social Fund into which it paid one and a half times the lease money to be distributed to the landless. It has also provided tractors to work on community-owned farms in the chiefdom which are yielding huge harvest. Over 1,000 farmers have benefitted from this initiative. This is true to one of its core values. “The SOCFIN group is convinced that one of the most effective ways to help support sustainable development is by doing business in a socially aware and responsible manner, helping to create and share wealth, invest in local economics, develop people’s skills and spread expertise across borders. SOCFIN firmly believes in an environmentally responsible management and cares about its social responsibilities”.

Also to this end, the company has respected and abided by prescriptions of the Environmental Protection Agency (EFA). SOCFIN Agricultural Company must be supported by all for more reasons than one. It is a win-win investment – Good for Pujehun and Sierra Leone and Good for the Company.