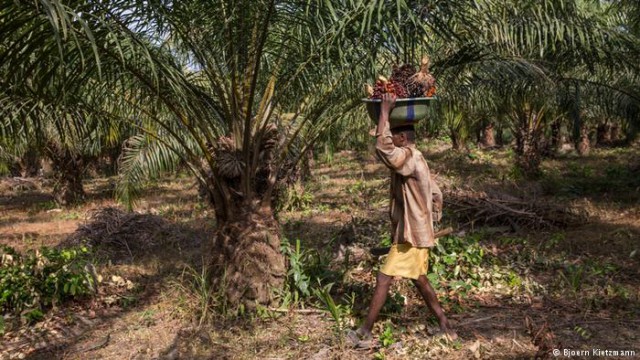 The Country Representative of the Socfin Agricultural Company in Sierra Leone, Mr. Gerben Haringsma while conducting an interview with this medium at his home in Freetown has said that as a Company, they are ready to work with whatever grievance redress team that will be set to investigate and solve the evolving problems in his operational area in Sahn Malen Chiefdom, Pujehun District. According to Mr. Gerben, they are “looking towards a Transparent and Credible Mediation Team to settle the Grievances between our Company and the Sahn Malen People”. The Government of Sierra Leone headed by Retried Brigadier Julius Maada Bio had set up a Mediation team headed by vice President Juldeh Jalloh to settle the grievances in Sahn Malen where Socfin is having palm plantations.

Mr. Gerben showed me a contract signed between the Community people and the Government of Sierra Leone which he said he got it by chance but as to whether he could make it accessible to the public or not, the Socfin Country Representative said “it has absolutely nothing to do with Socfin and there is no reason I should make it public because it was not signed between my Company and the People” adding that “it is a breach of contract if I make it public to anyone. Let the Government make it public”.

Although the Land Lease Agreement was not made between the Communities and the Company, the reason for the Company to operate in the Communities Mr. Gerben said is “the government of Sierra Leone represented by the then Minister of Agriculture; Dr. Sam Sesay subleased the lands to the Socfin Agricultural Company after leasing the lands in question from the Community Landowners” through the Chiefdom Stakeholders. According to Gerben, ‘the Civil Society people know very well the real situation but are failing to say that to the public” and did not know “why they keep ignoring this fact from the public” adding that “its unfair and its dishonesty and that’s how they want to play their game”.

Commenting further on the heavy tasks Workers complained of while working in the Company, Mr. Gerben said “we work within international standards and Sierra Leone has an average of less than 25% of the slashing tasks achieved by workers in other countries like Liberia, ivory Coast, Cameroun and Congo. The people here produce 25% less than they do in other countries”. He said when the Workers “complete their tasks or if they do more than their tasks, they get paid for that. There are more people who complete their tasks and get paid for that and only few do not complete their task which means they are not ready to work.”

According to Mr. Gerben, “more than 80 tons of stolen palm fruits were discovered around the Fakaba area and there were 135 illegal Mills that were discovered within the Company owned by the Community people”. “This is killing my Company and I have to close my company for two days because of this. If you have 50% of your properties stolen, the Company is dead” he added.  He said there are many Poro bushes in the Communities which they must respect due to cultural heritage but added “in every Poro Bushes, there are illegal Mills and in Bannaleh and Bassaleh areas, they make road blocks and there were people with machetes trying to stop the Police from going into the Villages to have a look around”.

When he was commenting on the alleged use of force and suppression by state securities during the recent unrest in the Sahn Malen Chiefdom, Mr. Gerben said “in a Memorandum of Understanding between the Company and the Government of Sierra Leone, the state must at all times provide security of its investment in the country because if the Company is to fold up, there will be no economic future in the country”.

Mr. Gerben said “Socfin has nothing to do with the recent incident as it was the Poro people that started to attack the security forces while they were heading towards our offices and the Police got afraid while shot were fired” adding that “I don’t know who fired the shots. He accused the CSOs of only relying on a bias report where they claimed that the Police shot the people and killed two of them.

When commenting about concerns of conflict in his operational area, Mr. Gerben said “I told the Vice President and the Government that I am very much afraid that people are incited for chaos so there will be massive stealing of the Palm fruits and they need to provide security”. The government waited for a long he told me.

According to Gerben, the Socfin Company in Sierra Leone presently have 1,400 fixed employees and about 2,500 casual Workers who are hired on a seasonal basis to carryout various tasks in the site. He said “I cannot hire 4,000 Workers or more on fixed contract when you and I know that Palm Plantation are seasonal crops and can only be harvested during a particular time of the year”.

In other to ensure a peaceful resolution after the formation of the mediation team headed by the Vice President, Mr. Gerben said he is welcoming the settlement of the differences between the Community “as soon as certain people stop the incitement of the Community people and stop informing them wrongly such process will be achieved”. He said he is “very confident with the Vice President as head of the mediation process” adding that “when the fruits were young, there was no fight and the problems are only coming when the fruits are now producing”.

According to him, “there can only be a peaceful and sustainable mediation process when certain people who incite the Community people are removed from the process”. He maintained that that “I have tried mediation process with the MALOA people and their problems are either very small or don’t exist or they have been solved very long time ago but the only thing they will keep on hammering is the review of the Land Lease Agreement which is not my document”. He added that “50% of the grievances that MALOA advances for me are political issues between the Paramount Chief and Hon. Siaka Sama where Socfin is transformed as the Victim”. He said he has no problem with the MALOA Union and has no problem of the minimum wage pointed by them adding that “I pay more than 40% of the minimum wage and it is normal for anyone to say his/her salary is small because of the many wants that exist. Ishmael, the most important thing is many of Workers are happy with the salaries they are receiving”.

According to the Country Representative, “for many years now I have been calling for the MALOA people to work with us. I have called for Hon. Sama to be the Chairman of the Grievance Committee instead of the Paramount Chief but he usually refuses then I keep asking if he is really interested about the solutions to the problems. I think he is misusing the people of Sahn Malen”.

According to Mr. Gerben, when he came to Sahn Malen in 2010, “there were no roads, there were no Schools, absolutely there was nothing but now that the Community is an economic thriving Chiefdom why must those Civil Society Organizations want us to leave from this Chiefdom”. He said the “people of Sahn Malen in general are supportive of the activities of Socfin except for few who follow the call of the Parliamentarian for more compensation. They are native people I forgive them but they keep following for paradise on earth. If this is stop I think it will be good for all of us”.

“I have invested huge amount of monies in this country and it will take me something like 25 years from now before I can get my monies back” Mr. Gerben said adding that when he started to export, he “needed to invest more than $15m into the Mill and requested for a loan from the ING Bank but Civil Society groups blocked that loan from the Bank”.

He said it is not “possible for a company to invest more than $170m and expect to get the monies back in 25 years. That is not possible and that is why they are calling to review the number of years” adding that “we are paying $12.5 for lease per year and the Government of Sierra Leone (5%), the District Council (20%) and the Chiefdom Council (25%) are all getting 50% of that amount while the Landowners are getting the remaining 50%”. He said Musa Sama, the Civil Society and the Landowners are not blaming him but are criticizing that 90% of the lease payment should go for the Landowners which he said its not his business to apportion percentages but “the work of the Government of Sierra Leone”.

There is a Communal Land Tenure System in the provinces. When asked why the Socfin Company did not do direct negotiation and land deals with the Community people who own their lands, Mr. Gerben said “if the Government want to attract Investors, it has to really make things simple for investors who come from Spain who have never been to Africa and know how Africa works. How can you expect an Investor from Spain to come and talk to more than 5000 Landowners for their lands” adding that “this is something the then Minister of Agriculture said to me that you cannot do direct negotiation with the People but we will do direct lease from the people and you do sublease to the Government so you have one party to talk to”. He opined that “its not a bad thing for the Government to do negotiation so Investors will have more confidence to invest in the country”.

On the allegations of fertilizers destroying the Swamps, Mr. Gerben said “they must come with fact’ adding that “we are the most monitored Company in the country” which have proper water control system in the site. “Ishmael let me tell you I import $4m worth of fertilizer each year for my plantation and do you think we will be fool enough to apply such fertilizer in the wrong place?. We do water analysis every three months” adding that people should come with evidence of samples of the places we have destroyed and if its true we wont challenge such report”.