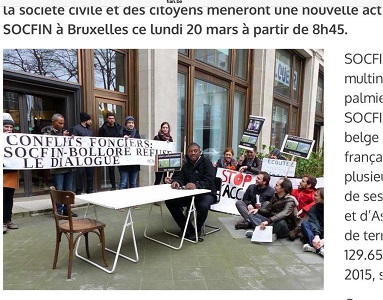 The controversial Siaka Sama of Sahn Malen Chiefdom in Pujehun District and the Executive Director of Green Scenery, Joseph Rahall were recently in Brussels, Belgium campaigning foreign investors not to do business in Sierra Leone.

It could be recalled that over the years, Siaka Sama and the Green Scenery, a local Non-Governmental Organization (NGO) have been campaigning against the operation of Socfin Agricultural Company that has invested millions of United States Dollars on oil palm plantation in that chiefdom and has provided job opportunity for hundreds of citizens including indigenes of Sahn Malen.

According to impeccable sources, Siaka Sama and Joseph Rahall have approached Socfin Agricultural Company for negotiations, but the company said they should not approach them directly and rather referred them to the government and the local authorities in Pujehun District.

The sources added that it was the refusal of the company to negotiate with Siaka Sama and Joseph Rahall that the two decided to travel to Belgium and engage a company that operates against the interest of Socfin Agricultural Company – FIAN.

Over the years, both the former Member of Parliament for the People’s Movement for Democratic Change (PMDC) and Green Scenery have been inciting indigenes of Sahn Malen to go against the operations of the company even though the company has been operating legally in the district and has successfully went into an agreement with government and the local authorities before any commencement of operation in the country.

The former MP, who has denied admonitions from government and the local authorities in Pujehun District to stop inciting people against Socfin Agricultural Company, and would do everything to end the operation of the company in that part of the country, including destroying the image of the country abroad.

He has been conspiring with Joseph Rahall of the Green Scenery to tarnishing the rebranded image of the country as long as the agricultural company continues to operate in the country.

Meanwhile, the Chief of Staff at State House, Mr. Conton Sesay is preparing a definitive analysis on the alleged unrest and land issues in Sahn Malen Chiefdom. 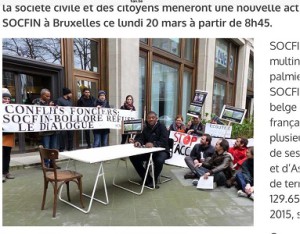