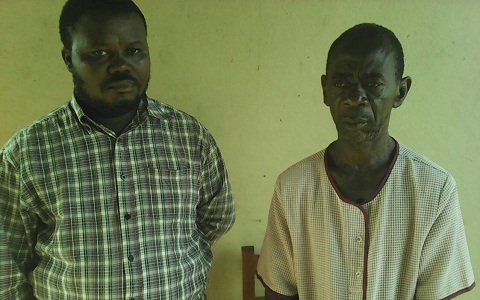 Brima Lappia former Chairman of MALOA left the Association because of the doubtful motive of Shaka Sama and others reflective in threatening development in the chiefdom and the district.

Lappia further explained that the Association lacks integrity and leadership skills in propagating its welfare.
“The formation of MALOA was to dialogue to Socfin Agricultural Company and the Chiefdom Authorities for the betterment of the Chiefdom and land owners,” he said.

“Hon. Sheka Sama dishonestly took the Association into politics by inciting community people against the wishes of the Company and the Chiefdom Authorities,” he maintained.

Eddie Amara in a very relaxed mood confessed that the Government should take stringent measures on MALOA and Green Scenery for their negative meddling into the day to day operations of Socfin Agricultural Company.

The former Member of Parliament, according to the former Chairman, was a charade to the membership of MALOA, his ego to challenge the Chiefdom Authorities and also cause grave havoc to the multi-national company was the biggest setback in his entire life.

“We prevailed on Hon. Shaka Sama to allow peace to prevail in the Chiefdom,” he confessed.

“We persistently engaged Hon. Sheka Sama in Pujehun and Freetown for truce in the Chiefdom but got deaf ears,” he narrated.

Also, the previous Public Relations Officer of MALOA, Brima Koroma, was full with praises and adoration for the Agricultural Company for its numerous developmental projects in the Chiefdom.

He recalled the days when he (Brima Kargbo) was prevailing on the Company and the Chiefdom to leave the Chiefdom and also make life very uncomfortable for the Chiefdom Authorities.

“I later realized that all the brouhaha and confusion imposed by MALOA will not help the district and the Chiefdom in terms of development,” he asserted.

“We hastily resign from the infamous group and join the Chiefdom Authorities and Socfin to bring development into the Chiefdom,” he affirmed.

“Our brothers and sisters are gainfully employed by the Company. We are proud of the Company and the chiefdom authorities,” the critic pointed out.

He also challenged Green Scenery to show any developments they have done in the Chiefdom.

Brima Koroma also called on the Government and the local authorities to completely eradicate MALOA and Green Scenery out of the Chiefdom for peace and tranquillity to prevail.