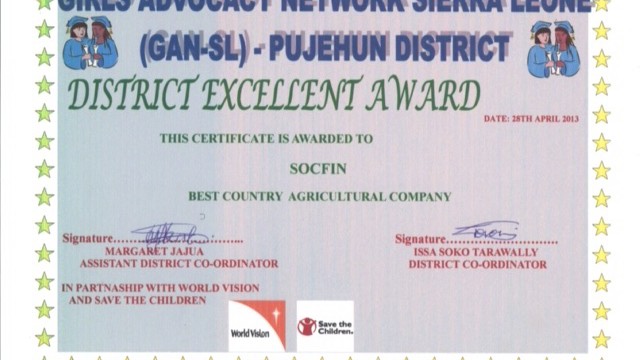 Girls Advocacy Network Sierra Leone (GAN-SL) operating in Pujehun District in partnership with Wold Vision and Save the Children Sierra Leone has awarded Certificate of Merit to Socfin Agricultural Company Limited for being the agricultural organization in the country.

Presenting the award to the company was the former Member of Parliament for that constituency Mr. Siaka Sama of Sahn Village, Malen Chiefdom. He praised the company for their tremendous efforts efforts in bringing the people closer to development in that part of the country.

The former MP also said that despite they were one time at loggerheads with the company, he is now satisfied with the corporate social responsibility (CSR) performance of the company which is helping to improve the life of the ordinary citizens in that part of the country.

The award ceremony attracted hundreds of inhabitants and representatives from local and international NGO’s who witnessed the ceremony.

Receiving the Award of Excellence was the General Manager of the company Gerben Haringsma. He thanked the organizers for choosing the company as one of the best agricultural organizations in that part of the country. He also extended his thanks and appreciation to the district coordinators Issa Soko Tarawally and his Deputy Mrs. Margaret Jajua for their tremendous efforts in bringing development to the people of that chiefdom.

The General Manager on behalf of his colleague shareholder promised that his company would work in accordance with the rules and regulations of the Company Act with special emphasis on providing more facilities for its workers. 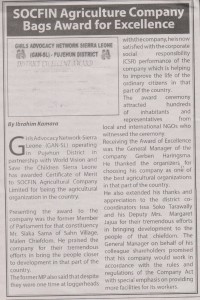 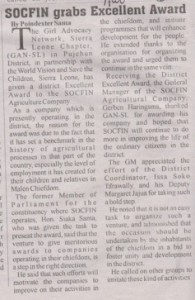 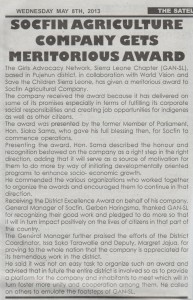