The Agricultural Workers Union was informed that in the international media statements appear, about workers conditions for Socfin workers in the Malen chiefdom and union relations.

I as Secretary General herewith want to state that, these statements are false and misleading. In fact it was Socfin who invited the Union to come to Malen and set up a local representation, headed by Mr. Julius Will, who is in constant contact with management and workers to solve all workers problems. The Union has free access to all operational areas of Socfin and unlimited possibilities to organize and discuss with its members.

All work done after the normal 40 hours working week, as sometimes necessary in agricultural operations is paid as overtime a 1,5 or 2 times the normal rate.

After the last CBA negotiations Socfin decided to pay 35% over the minimum wage laid down in the CBA.

The Union wants to declare that all statements to this affect in the media are false and misleading. 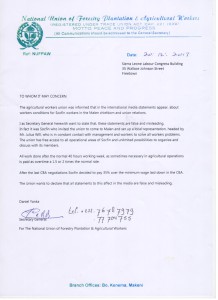