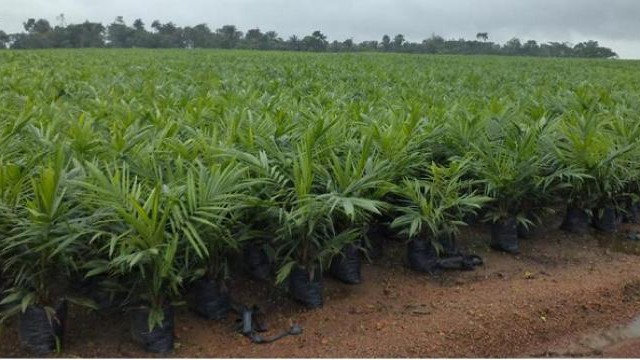 A company called Socfin, situated and lying in the Malen Chiefdom Pujehun District, with an investment value of US$122 million started operations in Sierra Leone in April 2011, making it one of the largest investment companies in the country.

>> Link to the article

General Manager Philip Tonks said his company has planted 3, 100 Ha of hybrid oil palm in 2012, intends planting 4, 000 Ha in 2013 of which 2, 300 Ha has already been completed. “Socfin has commenced construction of oil mills with processing capacity of 30 tonnes per hour and will be upgraded to 60 tonnes per hour where possible. The mill investment is US$22 million, possibly one of the largest in the sub-region of Africa and will be commissioned in November 2014,” Manager Phillip self-assuredly said.  “We operate in 9 other countries in two continents and have developed and introduced new technologies in palm production, which have been incorporated in the Malen project. » They included: New hybrid disease resistant varieties of palm developed bred in Indonesia. Latest technology of slow release fertilizers reducing risks of nitrate losses into the environment and improved plant utilization of fertilizers. New machinery for land clearing, reducing erosion and improving soil organic matter. This machine is one of 7 in the world and the only one in Africa costing US$800,000.

Land compensation is carried out by surveying each individuals land owners plot using a GPS. The land is compensated by payment to the individual and is recorded and these lists are kept by Socfin and the Chiefdom Authorities. Payments made to date for land compensation are as follows:

Land lease payments are made at an official ceremony to the various Authorities. Workers who spoke to this medium called on government to give the necessary supports to the company. Socfin has positively contributed in the improvement of the lives of indigenes of Pujehun hence its employment of hundreds of youths making them receive acceptable take home salaries every month. A visit by our reporter reveals nonetheless that the company is esteemed by people of Pujehun following its fulfillment of the required corporate social responsibilities the likes of road construction, other needs etc.